By do
In Short-Stories

What happens when you follow a stranger in Marrakech

The sky was bleeding, the last rays of sun cutting through the crimson horizon of my second day in Morocco. By then, I must have been wandering the streets and alleys of Marrakesh for the past six hours, absorbing (and somewhat overdosing on) the colorful people-filled chaos of my surroundings, when a small little man, garbed in an all chocolate brown version of the traditional robe, appeared in front of me, mumbling something I could not comprehend and soon gesturing a frail looking hand, inviting me to follow.

That moment when my friend Frank cringes….

Too tired to be argumentative, uncertain as to where I was anyway, and being the curious cat that I can be, I began following the hunched little fellow, at a safe distance, lagging 15 or 20 paces behind, looking around at the buildings, the people, the signs, trying to identify some sort of landmarks I might have noticed on the blurry google map of the Medina earlier that day, but to no avail.

As I wander along, eyes darting between everything crossing my path and the little man, I can’t help thinking, because I know it for a fact by now, that wherever this impromptu guided walk will end, this is going to cost me a dollar or so, I just know it, and in fact, at this point, this is the only thing I really know and sure about, clueless as I am as to where I am, or where this improvised guide is taking me to.

While going through the dance steps of hurrying in his footsteps each times he turned around to ensure he hadn’t lost his prey and slowing down once his attention had turned towards our unknown destination, discreetly, I slipped a hand into my pocket, fingers blindly perusing the inventory within to isolate from the small bundle of $1 that -one- bill I will eventually have to surrender. A 1$ along with a little heated exchange where he will argue that 1$ is nothing and where I will have to shamelessly lie through my teeth and say this is all I have.

Lost in thoughts and anticipation of the argument soon to come, I failed to notice that my hunched little guide had stopped in his track, and suddenly found myself (almost) atop of him in a piggy-riding style.

More swiftly than I could have possibly credited him for thus far, and leaving me no time to step back or even squeal, he whirls on his heels and pushes something green and leafy into my face, pursing his lips back into a broad toothless-smile.

I arch an eyebrow inquiringly as I take a step back to widen the gap between the two of us. Mutedly, his gums still bared into a smile and catching the golden glow of a day slowly dying into evening, he responds to my puzzlement with a step forward, pressing the greenery further into my face, with a clear aim at my nose.

With his hand still far closer to my face than I could truly appreciate, he gestured with the other one.
Apparently, we haven’t yet reached our destination.

After making a point of showing him I can hold the mint against my own nose on my very own, he offers a brisk little nod of his head, the pointy hood of his robe bobbing along, and takes a step through something you could call an arched gate. “Hrm.” I hesitate for a moment, staring after him, staring at the shadows now looming where he stood a few seconds ago.

That second moment when my Friend Frank cringes…

With a shrug and not without rolling my eyes at myself, I follow him through the crumbling gate, barely ducking in time to avoid a low beam, but losing my balance as I do so, and thus leaving my self completely unprepared and unable to defend myself when suddenly, I am slammed, right into the face, right into my nose, the strongest smell I’ve ever dealt with filtering through the leaves of the bouquet of mint I now desperately press onto my nose, into my nose, assaulting me to the point of bringing tears to my eyes, momentarily blinding the vision I have of my fellow-guide as he casts on me an amused look, gums gleaming in all their grinning glory.

This is where they convert animal skins into leather, soaking them into huge basins of water and mixed substances of different nature. Scattered all around are raw pelts of all sizes, some still bearing the blood stains and the flesh speckles of their original owners, and toxic smelling pools tapped, or not, with blankets. The resulting perfume is that of death, putrefaction, of dissolving flesh, hair and blood, with a not-so-subtile underlying scent of abrasive chemical.

If the main result of the hard work being done here produces leather of an internationally renown quality, a market feeding countless families, the byproduct is a hard-to-breathe, thick, putrid smell, the type of which makes breathing through your mouth instead of your nose not quite an appealing solution in itself, at least no a solution I could consider, then and there, without gagging … and yet, here laborers come everyday, working 10-12 hours. I. Just. Can’t. Imagine.

Once my eyes cleared up and once I could take a breath, through my nose without feeling stomach reflux at the back of my throat, I wandered the Tanneries, for a moment, and was able to capture these two men working among the pelts and pools, and here I share it if only to pay tribute to their physical resilience, their dedication and, for certain, their olfactive tolerance (or lack of olfactive sense as it might be!).

In the end, the experience was worth the dollar I paid my toothless guide (who was wise enough to wait for me outside the Tanneries), as well as the expected insults he grumbled in good-spirit and freely, mind you! 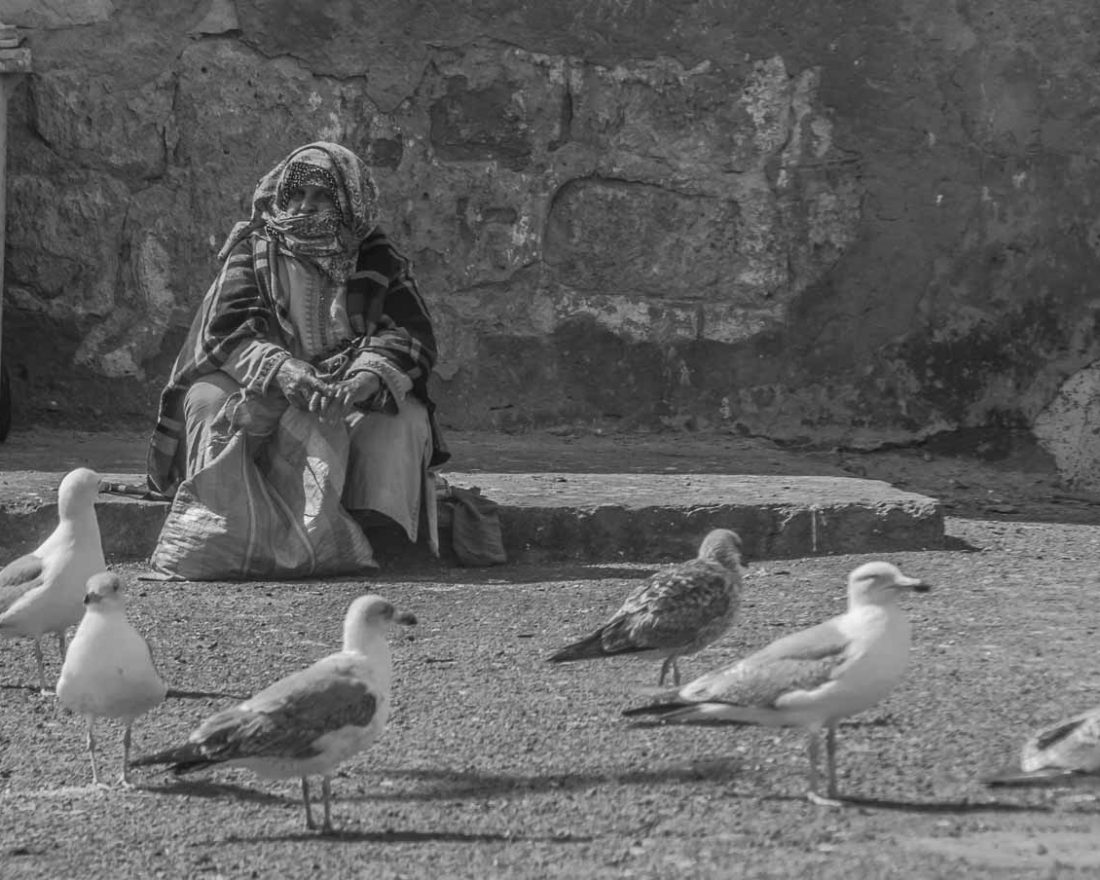 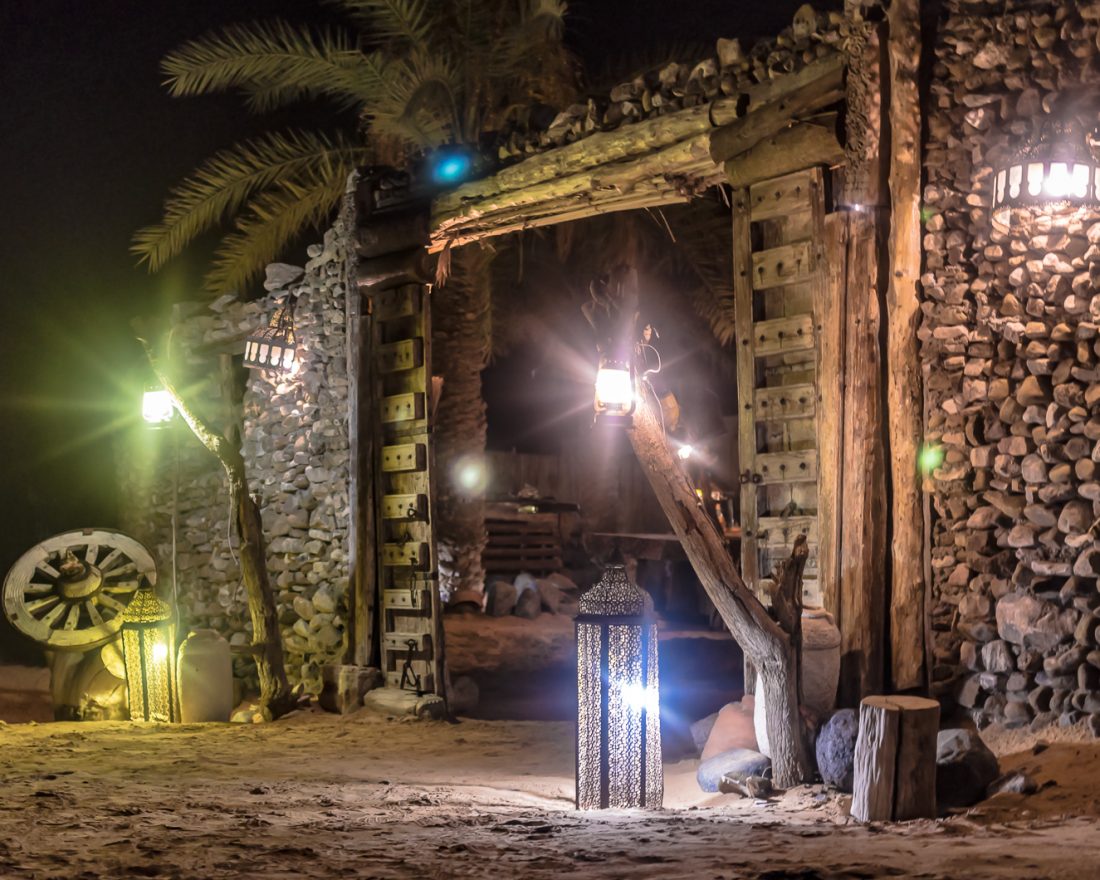 Dubai is excessive, everything being the tallest, the biggest, the largest, the most strange or seemingly out of place like a ski resort inside a mall when outside the […] 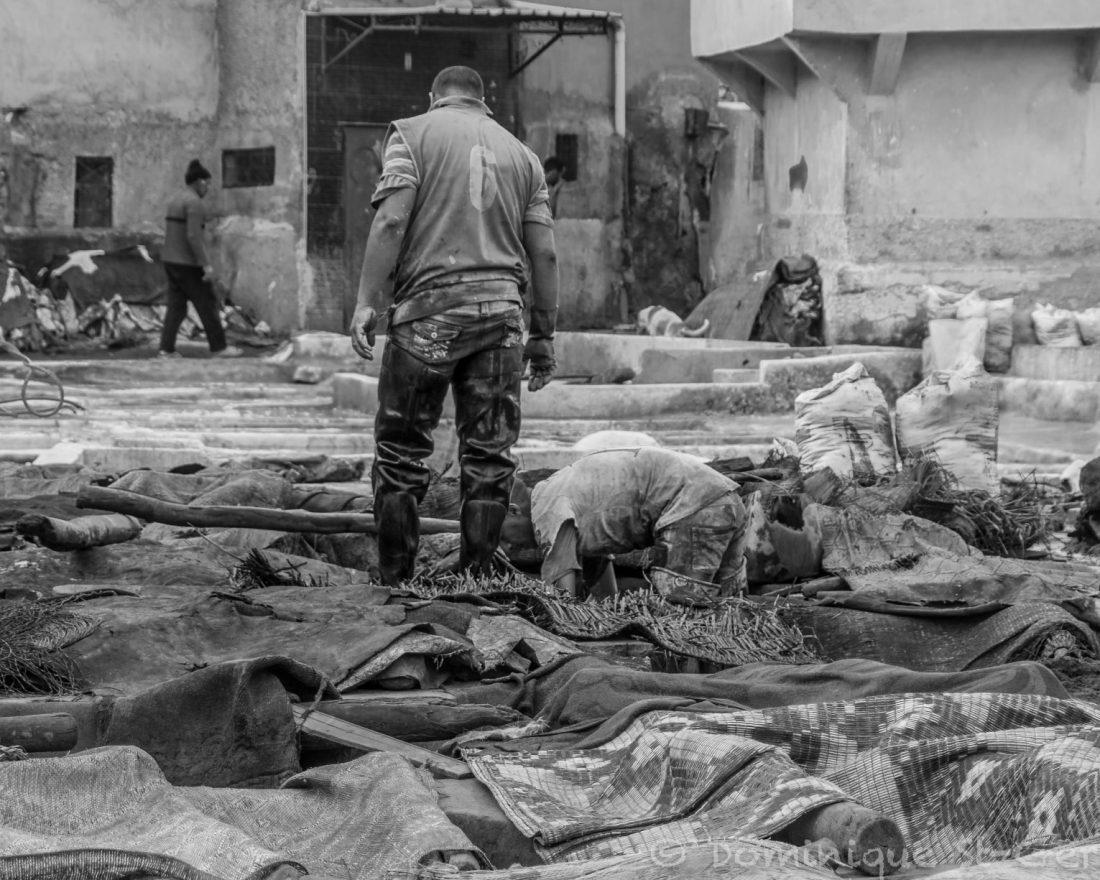 What happens when you follow a stranger in Marrakech Medina, Marrakech, Morocco Feb. 23, 2016 The sky was bleeding, the last rays of sun cutting through the crimson horizon [...]
Continue Reading
0
0